It is always a big question for any business analyst to predict rise or fall of a business sector . Highly educated finance and management executives fail to predict these disruptions within a company or in the sector .

A decade back , when I myself entered the Sadesaati period, one fine morning I got an idea while reading Economic Times. The idea or question was: is Saadesaati / Dhaiyya of Shani ( Saturn) applies to companies or countries also ? I did my research for about 3 years and then I found enough data to prove  that it does apply to any entity , which is born to do some  specific function in this world.

Next question was to find interlinking of the entities ,because each one undergoes its own Saturn’s transit as per its starting / birth point. So, it was easy to know the start points for countries like India / Pakistan etc who celebrate Independence day . Further companies have their dates of registration and time is usually taken at noon,the office of registrar opening . But most difficult was to know the Rashi for a running system or sector ,which does not have a certain beginning date.

Acharya Varaahmihir’s concept of Prabhaav Rashi solved my problem, which says: go by natural rashi’s linking with Bhava significations. So 4th house means vehicles and therefore vehicle sector will have 4th natural Rashi from Aries ( Mesha) ,that is Cancer. So,Cancer  will be rashi for Automobile  sector . 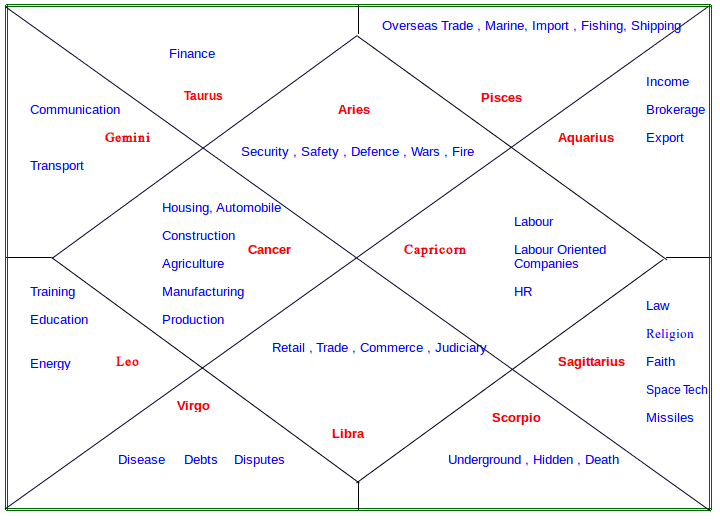 Other things were then easier to co-relate. The sector relates to whole Earth so the Saturn’s transit effects will be global in nature.A company is registered under a national law , so you need to see a country’s Saturn transit also and finally the subject company’s registration date will give you Moon position on that day,which will be Rashi for that Company.Therefore, a company’s future depends on Saturn’s transits on sector,then country and finally company also in increasing order. 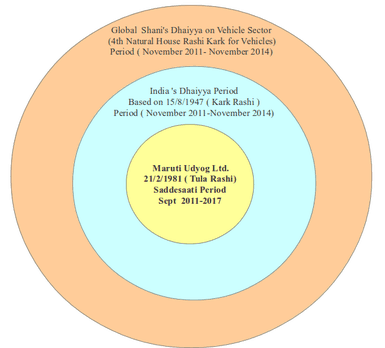 These 3 concentric circles should be the basis in strategic planning of any new company , which plans to enter a sector or  any existing company  in the sector to sustain or exit the sector or increasing / decreasing the capacity.

Once Rashi issue is resolved ,let us understand Saturn’s transit method. Saturn revolves round the Sun in about 29.5 years ( roughly 30 years) , so 12 rashis get average  2.5 years each period. Now historical and empirical data suggested that, when Saturn starts approaching near that rashi, ( transit at 12,1 & 2  counted from the concerned Rashi ),it  creates great  upheavals and the entity undergoes a complete transformation in its looks, nature and character during this period. This 3 rashi transit is called Saadesaati because it takes 3×2.5=7.5 years and it happens once in every 30 years. It is like a gruelling  annual exam  or external audit phenomenon. 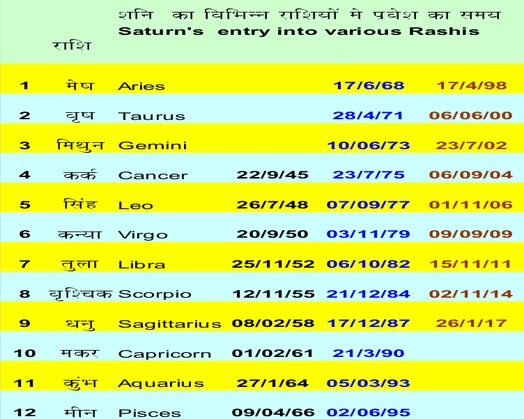 Then there are two mid term exams of Dhaiyya in 30 years period , because it lasts only for one sign of 2.5 years. The Dhaiyya happens , when Saturn reaches 4th rashi or 8th rashi from the concerned Rashi. Out of 4 & 8, the 8th transit is most severe and sometimes it is more severe than Saadesaati also.

Now let me start Saadesaati discussions for Maruti Udyog Limited . The company  in present form was registered on 24/2/1981.  That day Moon was in Tula or Libra rashi so, Maruti Udyog’s Rashi becomes Tula .

Accordingly , Saturn’s entry into Kanya ( Virgo) will start its Saadesaati and it will be over when it leaves Scorpio covering Kanya , Tula and Vrischik transits. Saturn entered Kanya in November 1979 and exited Vrishchik(Scorpio) in December 1987. Thus, company was born during Saade saati, so it is vaccinated for Saturn’s effects and it can successfully get over  such periods by  making  due changes in its functioning. Next cycle would be after 30 years , so current saadesaati of Maruti is running from Sept 2009 and will last until 2017.  Its present labour unrest is part of the same .

Then let me discuss the Mid-Term Dhaiyya periods as well. The Dhaiyya for Maruti will be when Saturn enters Makar(4th from Tula) and Vrisha(Taurus) , which is 8th from Tula. Ashatam Shani for Maruti was, when Saturn entered Vrisha in June 2000 and it lasted until 2002 end . During this period also, company faced industrial unrest from workers and there were hunger strikes for 90 days, which prompted government for its complete selling of equity and making Suzuki as owner of company and its character of joint venture was changed to private venture.

Vehicle as a sector has Karka as its rashi ,as shown in beginning image, so Saturn’s transit from Mithun to Simha becomes Saadesaati for this sector and last time it happened from 2002 to 2009 end. Global vehicle sector underwent big crisis in the whole world, particularly in last leg of 2006-2009 when Saturn was in Leo, its most inimical sign. We saw the failure of global vehicular manufacturing giants to sustain themselves. So Tatas purchased  Jaguar  Land Rover  from UK in 2008 and many companies  like Daewoo Motors could not absorb Saadesaati shock and changed hands like Mahindra’s purchase of South Korean company  Ssangyong   and split of Hero Honda into separate companies.

The Cancer sign has 4th transit of Saturn ( Dhaiyaa) currently  from November 2011 to November 2014. Consequently,the global sales are down to record levels in last 7-8 years. Manufaturers are having big inventory and sales are not happening. All automobile companies are finding cost cutting and sales margin reduction, retrenchment and lay off of workers , which is creating strikes by workers .Mahindra & Mahindra, Bajaj Auto, Tata Motors and Maruti , all old stalwarts of Indian automobile sector are facing strikes and industrial gloom.

Our country became Independent on 15/8/1947 midnight. At that moment , Moon was in Cancer or Kark rashi.

So, India as a nation, is also undergoing 4th transit of Shani from November 2011 to November 2014. Result of this transit is total policy paralysis of central and state governments and people feel, as if there is no governance of any kind. Central government is in election mode and populist measures like food security bill and such things are  badly hurting the industrial and economic environment of country, with rising budget / trade deficit and falling currency.

Therefore, we can observe that automobile sector is undergoing global transformation and our country is undergoing policy reform period in 2011-14 period.

Post-Tsunami in 2011, Japan is struggling to revive its economy , so Suzuki ,the Japanese owner of Maruti is also disparate to recover its cost of new plant in Manesar,started 3-4 years back. And they are cutting cost by hiring casual contract workers in place of secure regular workers.

This way, we see that Maruti suffers at all 3 levels of Saturn’s transit ,making it more vulnerable during 2011-14 period. All these issues will be resolved by the end of 2014 only , when Dhaiyya of India and auto sector would complete but Maruti will still be left with last leg of saade saati. So, some issues will still keep coming.

Saturn is outermost planet of our visible solar family and hence nothing is spared from its close scrutiny and despite its slow motion, when it comes to inspect an entity , there is no possibility of escaping the criticism and grassroot transformation is a must .

Saturn always represents common toiling masses and Sun,the ruler, is its greatest adversary. Every 30 years ,it enters Tula or Libra and remains there for 2.5 years and then whole world observes the uprooting of tyrannical empires and Kings , while popular unknown persons become heads of the state.Renowned CEOs like KV Kamath of ICICI get out from companies ( Infosys) and so on ..

All  over the world , governments feel humbled by the protests of crowds from common people. Trade union become more active ( attention : HR strategy Managers !).  Currently Saturn is visiting its exalted sign of Libra from November 2011-October 2014. Saturn’s opponent Sun is weakest in Libra sign , so the government finds it difficult to manage public affairs.

Applications  of  Above  Information :

There is tremendous information and hints hidden in astrological foresight, which can be used by big corporates and individuals. If Indian automobile manufacturers knew this impending cycle of Shani, many of them would not have gone for capacity addition in 2008-09 at high borrowed cost and Maruti  would not have current industrial unrest.

Those who are working as Fund Managers of Mutual / Equity Funds can use this astrological insight while purchasing / selling auto sector shares.

And as individuals retail  investors ,  we can also benefit from this information.

The private equity investors , employees working in that sector, government ministry,financial institutions and almost every stake holder can make use of this forewarning system and strategic plans can be implemented to the benefit of all.

This is only one drop from ocean of  astrology used  for Corporate Strategy planning. Unfortunately all business schools are engaged in teaching only 5 M of Management, blissfully unaware of the Cosmic  TIME cycle ,under which all 5 M operate !

In comments , Mr. Vijay Maurya had asked what would be share price of Maruti after one year from July 2013 .