I had written this essay in June 2015 and similar situation is being created this year again ! 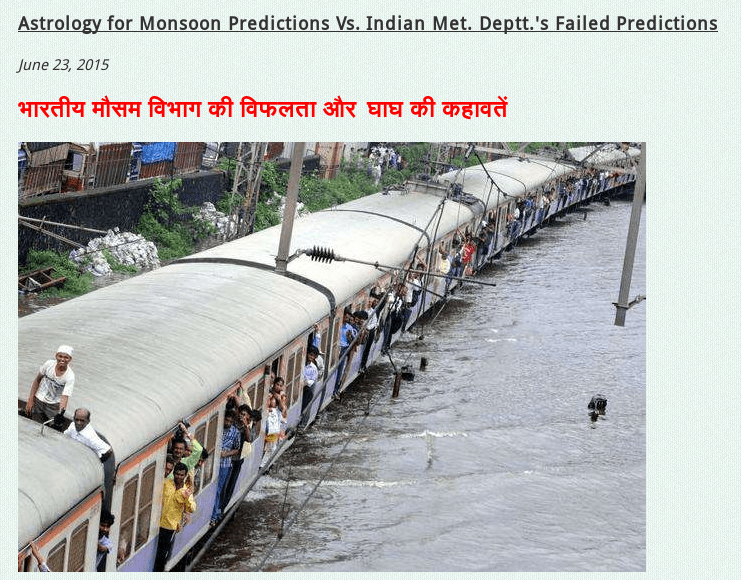 Well , for someone aware of basic astro-meteorology , all these predictions were meaningless . Why ? Because a simple and old Ghagh’s idiom for agriculture forecast predicted otherwise . He says in chaste Hindi

This means that as long as Sun is just behind Mars in degrees ( gap should not be more than 25 degrees)  during rainy season , the rains will be equal to dew drops . Alternatively , it means that when Sun gets ahead of Mars , there will be normal rains.

How & Why This Happens ?

Sun moves at almost 60 minutes ( 1 degree ) a day (as seen from Earth) . This way, Sun covers  whole journey in 365 days . Mars has an average speed of about 35-40 minutes a day during its journey in 12 Rashi Zodiac. This way , it is possible for Sun to overtake Mars in some days . Every alternate year this situation may happen in different signs, but its happening in June-July-August months of Monsoon is not necessary and some times this may take years as happened this time after last such occurrence  in 2002.

When Sun becomes behind Mars and  tries to overtake it  during rainy season in India , the rains are held back ( dew drops) and once Sun finally overtakes , usually flood like situation occurs as if flood gates were opened by Monsoon.

Below is given Sun and Mars positions since start of  June Month. Sun was behind Mars by 3 degrees ( 16 & 19 degress respectively in Taurus ) on 1st June 2015 . On 15th June 2015, Sun becomes ahead of Mars and Monsoon starts showing its signs and by 19th June Mumbai was flooded by 300 mm rains in a day  and Monsoon is now active in western and northern states of India .http://www.mid-day.com/articles/mumbai-flooded-2-killed-bmcs-claims-about-rain-ready-city-washed-away/16303156

Also, Cancer sign is central to rains/Monsoon operations in Indian subcontinent because Sun enters in this sign in July every year. Whenever this sign gets afflicted by good or bad planets , rains are either missed or floods happen. Last year , Jupiter entered Cancer sign in June 2014 and its stay caused deficient rains. This year , it is moving out in second week of July , so rains have to be normal, except when  Mars enters in Cancer in August 2015 which may again cause some abnormal ( deficit/excess ) rains during August month as Mars is planet of crisis. Govt. should be ready for disaster management for floods after July 2015.

Past Example of This Yoga

This very combination had happened last time in 2002 during rainy seasons. On June 1, 2002 , Mars was at 8 degrees in Gemini sign while Sun was behind Mars at 16 degree Taurus , so a gap of 22 degrees was to be covered by Sun at net speed of @0.2 degree per day .

Sun took about 2.5 months to overtake Mars and by then August month had arrived.  On 12th August 2002 , Sun overtook Mars and Monsoon started getting active all over country but it was too late . Still August month recorded only 4% deficiency compared to July 2002. See full IMD report which declared 2002 as drought year http://www.imd.gov.in/section/nhac/dynamic/endofmonsoon2004.htm .

(Percentage Departure for the country as a whole in drought year)

This knowledge has unlimited scope for individual decision-making in fields of investing and agriculture as entire global economy now runs on forward knowledge basis  with forward trading in equity shares and in agri commodities. Within  5 days of Monsoon getting active in North and western India  , Nifty index rose by 5% within 4 days and people forgot El-Nino theory .

Many persons ask me why such information by astrologers is not published  in advance . Well , we know what happens to advance ( even wrong ones ) predictions via mass media from Weather department’s forecasts . It creates unnecessary hoarding of food grains , commodity trading and so on, just because most of us are greedy persons and want to be benefited at the cost of others.

So, astrological knowledge or any other such knowledge works best when given to only select wise persons, who would not create chaos by advertising and spreading this nuclear science like explosive knowledge , adding their own spices , with private TV channels having a breaking news for many days. Astrology was never intended for mass use and it has been always limited to personal use.

This year again Mars is ahead of Sun in rainy season . On 17th July 2019 , Sun will enter Cancer and Mars will be at 15 degree in Cancer . 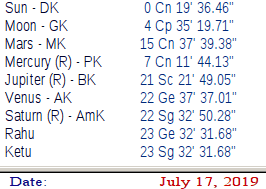 Mars will remain remain ahead of Sun till 2 September 2019 after which Sun will be ahead .

However , this time , Jupiter is in Scorpio sign and aspecting debilitated Mars , so it can cause problems due to rain but it may be due to plenty of rain i.e. floods also.

Therefore , Mid July 2019 to mid August 2019 can be very rain excess or deficient and situation can improve only in September 2019 when normalcy may be restored and season may end up as normal  rainfall for this year  .