Return of Localization in World Economy 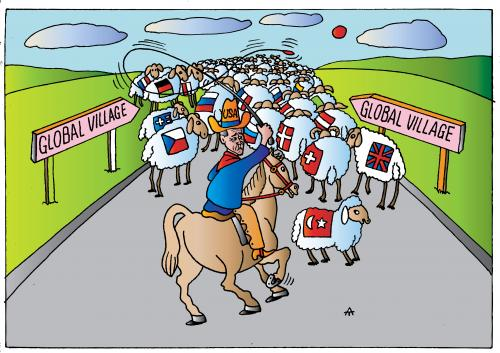 Global economy reverses its trend every 30 years , which is basically Saturn’s 30 years revolution period around Sun. That is why globalization started in 1990 is now replaced by localization in several big countries.

In my 2 decades of astrological journey , I have found Saturn as the greatest Game Changer and 30 year cycle based on Saturn’s revolution around Sun as the best indicator of long term changes.  I have lots of research data on this aspect , which can be used productively in investment decisions .

In my today’s writing , I will discuss the return of Localization in World Trade and Economy .

When & Why Globalization ( liberalization)  Started ?

Most experts would agree that real Globalization started from 1990 . Before 1990 , foreign investment / trade happened by way of direct transfer of machines and commodities. Globalization was not possible before 1990 because world was divided into 2 major groups : one controlled by US led capitalist countries and another by USSR led socialist economies ( erstwhile Russian Confederation with its 14 neighbors ) which included China , India , Eastern Europe. These two trade blocks insulated trade from each other , so globalization was not possible .

After second World War , while capitalist group developed economically , the socialist block stagnated and then started declining economically . By 1990 , the leader of Socialist block USSR collapsed . That led to India and China also embracing Capitalism as the only option to get out of problems created by socialism entangle .

That led to great trade and investment opportunity to Capitalist countries led by USA and western Europe . We all know that there was a body called GATT ( General Agreement on Trade & Tariff ) created after Second World War . Uruguay round for changing this agreement started when Ministers met in September 1986, in Punta del Este, Uruguay . But these talks accelerated because of disintegration of USSR and WTO ( World Trade Organisation ) agreement signed in April 1994 and WTO started from 1 January 1995.

The Arrival of MS Windows & Internet in 1995

Next big change for world trade & economy came from technology called as information technology . The start of GUI based OS of MS Windows and application software based on that changed the offices world over . Start of internet and connecting of computers worldwide was another big boost for foreign trade and investment .

These changes forced the Asian Economies of India and China in 1990-91 to leave the path of socialistic economy to free trade and capitalistic competitive economy . India under PM Mr PV Narsimha Rao and China under Deng Xiaopeng opened their economies for foreign investment and free trade , guided by WTO . India modernised its stock markets by adopting electronic share trading , started by National Stock Exchange for foreign capital investment in its debt and equity markets .

The fall of Berlin wall subsequent to disintegration of USSR paved the way for Germany’s unification in 1990 . Then  Maastricht Treaty established the European Union in 1993.

The Start of Globalisation

Practically we can say that the process of Globalization started taking shape from 1986 with Uruguay Round , it got major boost in 1990 and by beginning of 1995 , world trade and globalization were in practical operation . So 10 years were spent in achieving the practical results .

The next 20 Years of Globalization made many countries achieve tremendous economic growth . China, India, Germany , USA were major beneficiaries of this Globalization . With start of 2014 , the negative side of globalization was becoming more prominent . The fast growing economies started stagnating , unemployment started increasing . The recession of 2008 in US , the global turmoil in financial markets , their cascading effects on each other forced world leaders to talk about national priorities , employment generation for citizens .

End Of Globalization in 2016

By 2016 end the process for localization has started in many countries with new nationalist governments coming in India , US and other countries . The Indian PM announcing “Make in India” in 2015 was echoed in US elections of November 2016 where Presidential Candidate Donald Trump won it on promise of bringing back jobs to US citizens from China and India. Same way , Britain decided to exit European Union . Germany and other European nations are also likely to exit European Union in coming years after elections there .

Libra is Zodiac sign of Trade where the Saturn exalts and the world trade peaks in old form . It was there till September 1985 . Scorpio the 8th Sign is for grassroot changes so tectonic shift happens in thinking . Saturn was in Scorpio till December 1987 . World politics had started chnaging in this period and Uruguay Round talks started in 1986. Till 1990 , Saturn was in Sagittarius and major upheaval happened during that period in world politics . Saturn’s stay in own signs Capricorn and Aquarius from 1990 to June 1995 finally led to WTO or globalisation of trade and economy .

Saturn reverses the trend after 30 years . If markets were in protective mode before 1986 then it started the globalisation process . Now when Globalisation peaked in 2014 during Saturn in Libra , the process of protectionism and localization has started in Saturn in Scorpio . Like wise , Saturn in Sagittarius during 2017 to 2019 will lead to major realignment of world economies in Europe, Africa, Middle East, Africa  and Asia .

The signals are already there . The Modi wave in India , Brexit in Britain , Trump in US are just beginning points . Like USSR , China will feel the heat this time as it has benefited most by Globalization and there are enough signs for its crash as communist country or even disintegration. Russia is also under stagnation and Putin departure may crack it any time .

Saudi Arabia is already under a shock and it is in existential fear. It has to find new ways of living as oil income is dropping.  See this link  http://economictimes.indiatimes.com/news/international/business/saudis-are-trying-to-figure-out-how-to-survive-in-a-post-oil-era/articleshow/55867015.cms .

India, Pakistan will also feel the pressure to reform the politics and economy they have been in last 20 years . The new realities may force economic union in South East Asia led by India .Japan, China & Russia may join it .

So, after 30 years , we are to witness the scenes of 1990s , when USSR disintegrated , Germany became one , Europe became one . Let us see now who unites and who disintegrates in next 10 years .