Saturn is now in Capricorn since 24 January 2020 and it will be there till April 2022 . The next transit of Saturn would also be in its own sign Aquarius till March 2025 . Therefore effectively Saturn would be quite powerful for next 5 years and it would shape new kind of politics and economy all over world.

How It Affects Politics & Economy ?

Saturn is natural planet for Karma , job , profession and Capricorn is the sign for work , recognition, name and fame . This sign is considered Human Resource (HR) Sign. So , expect big changes in hiring policies all over world . The permanent , secure kind of government or private sector jobs may be reduced further while there would be more short term , contractual hiring which will increase employment though high paying jobs will be few .

Saturn represents mass people , the powerless toiling billions and they get empowered when Saturn reaches Capricorn but the results are visible when it reaches Aquarius. That shows possibility of mass agitations against authority through out its stay in Capricorn . 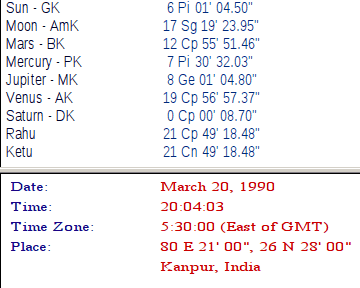 And if you want to go even earlier , Saturn was in Capricorn from Feb 1961 to January 1964 . It led to humiliating defeat of India in October 1962 by Chinese , leading to fall of PM Nehru and subsequently divisions in strong Congress party .

So, this time also, we can expect major changes in Indian and world politics in coming 5 years with mass agitations on religious and sectarian grounds , decline of economy is natural , global trades to follow new policy of localization . New leadership would emerge at central level politics which may not be as aggressive as it is now . American Presidential election this year can see reversal to democrats .

How it  Affects Individuals ?

If you know your Moonsign ( The Zodiac sign of Moon at the time of  your birth as per Indian astrology ) , then you can read how Saturn would be affecting you while it is in Capricorn till April 2022 :

Aries : Saturn would be in your 10th house of career , job , name and fame and this is good time  to focus on career and achieve your planned goals for career . Going abroad , changing house , marriage are other possibilities .

Taurus :  This sign was under Ashtam Shani Dhaiyya transit since January 2017 and it was difficult period for Vrishabh Rashi people . They will get relief , their luck would start working again though it may take another 5-6 months to see visible effect . Financial sector would recover slowly .

Gemini :  This sign will now have 8th Ashtam Saturn Dhaiyya. They will undergo major changes in education , children , family , money and career issues which will be painful but rewarding at end . Communication , Media , Transport sector would undergo major reforms .

Cancer : This sign will be under direct aspect from Saturn so it will bring mental worries related to partners, spouse , property , homely happiness .  Real estate and manufacturing sector would see decline .

Leo : Saturn would be 6th from this sign so these people will feel powerful and they will indulge in disputes , litigation but at end , they may lose suddenly .  Energy sector may suffer extreme variations in prices.

Virgo : This sign was also under 4th Saturn Kantak Shani Dhaiyya since January 2017 . They will recover and now their focus will be on new learning , children birth and starting new relationships, marriage , business partnerships.Pharma sector recovery is seen.

Libra :  This sign would be now under 4th transit Shani Dhaiyya . So , they may face pressure in job , change in career , involvement in disputes , litigation , sickness may lead to increased worries. Retail and consumption , E commerce would undergo many statutory changes which would initially be difficult but would be good at end .

Scorpio :  This sign was under Shani Sadesati from November 2011 and now it is in better 3rd house . So, these people will recover and perform better , can have new education, child birth in family . Mining sector , oil , gas exploration can benefit in this period.

Sagittarius  : This sign is under Shani Sadesati from November 2014 and now last phase will be running , so some improvement is expected . Finances and family situation should improve , still some worries would remain till 2021 end related to earning and homely happiness . Mutual Funds and Asset Management companies will undergo reforms . Religious issues will also see some legislation and regulations.

Capricorn  :  This sign is also under Sadesati from January 2017 till March 2025 . This will have middle phase where issues related to career , spouse , business partners , performance related worries will dominate the period . Hiring , HR sector will undergo rapid legal and corporate reforms.

Aquarius :  This sign is starting now its Sadesati  which would last until 2027 . First phase would bring lot of discomfort , loss , expenses , going abroad or new , distant places . Export sector would undergo major reforms and regulations.

Pisces  :   This sign will benefit mostly as it will have Saturn in 11th from itself which is house for gains . After that , its Sadesati would start . Overseas related ventures, maritime, shipping , imports may benefit .

6 thoughts on “How Capricorn Saturn will Affect You & The World ?”