In 2015, Indian government banned Maggi brand of noodles , which happened when Taurus sign was having malefic planets influence. It was good opportunity for equity investment in Nestle. The Analysis written in June 2015, shows how astrologically the business sectors get affected and short term opportunities exist for investment in good equity shares .

Maggi was alright until 15th May 2015 . She was darling of old and young Indians for last many years . So when she first time faced the destiny ,like fellow Indians, it was natural for her to seek the advice of astrologer and she visited YCSHUKLA.COM for honest opinion to know when she will be back in Indian Kitchens. She did not had consultation fee but she hinted to get benefited by linking the analysis to Nestle India’s share price movement , so I accepted her case .

Maggie being under food category , her Moonsign became Taurus , second sign used for face & food related things. So, entire analysis was done analysing Planetary effects on Taurus sign. On 14th May 2015 , everything was alright , as you may see in this chart . Though this sign was under bad aspects of Rahu ( foreign company) and Saturn ( the trouble planet ) since last year but the ignition was missing  and Sun /Mars provided it. 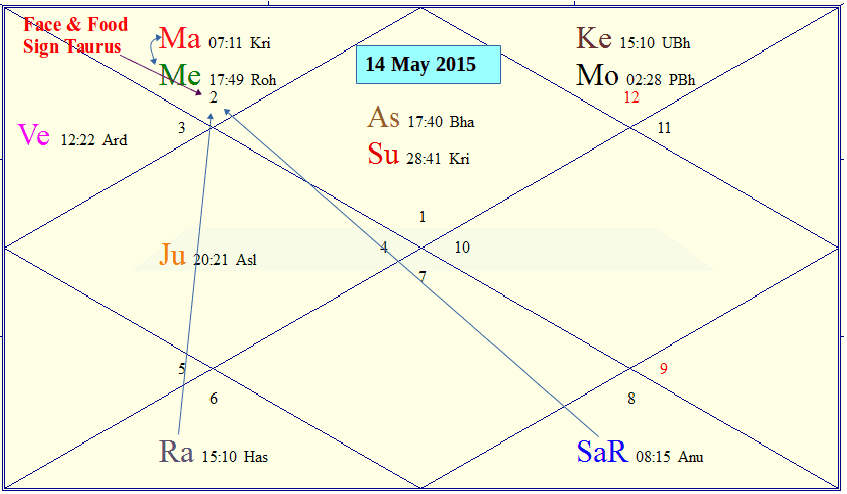 The Start of Tragedy for Darling Maggi

With entry of Sun into Taurus sign , the unprecedented misfortune struck Maggi. A govt. ( Sun) food inspector finally got a bad testing report for Maggie and it was published in media .See the inimical effects of Sun-Saturn, Mars-Mercury , Sun-Rahu, Mars-Rahu formation in Taurus sign on 16th May 2015. On 18th May 2015, Moon also joined this gang creating more combinations of Moon-Rahu, Moon-Saturn . So national media also start noticing Maggie’s sickness and misfortune . 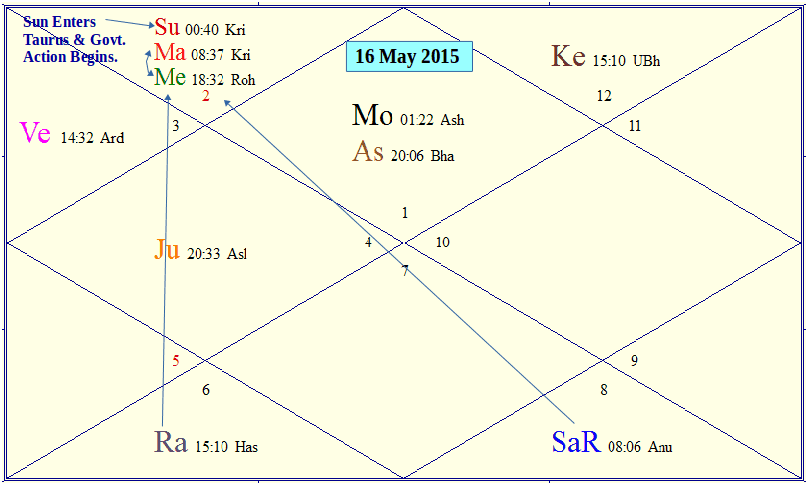 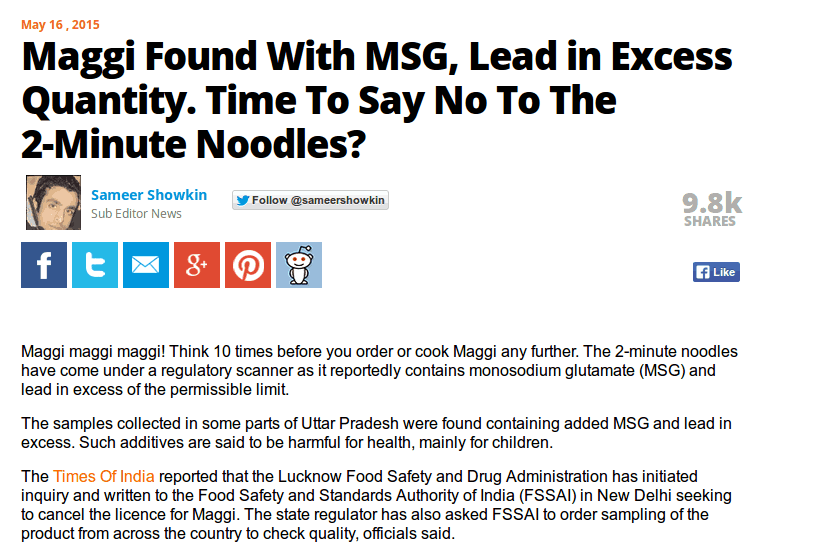 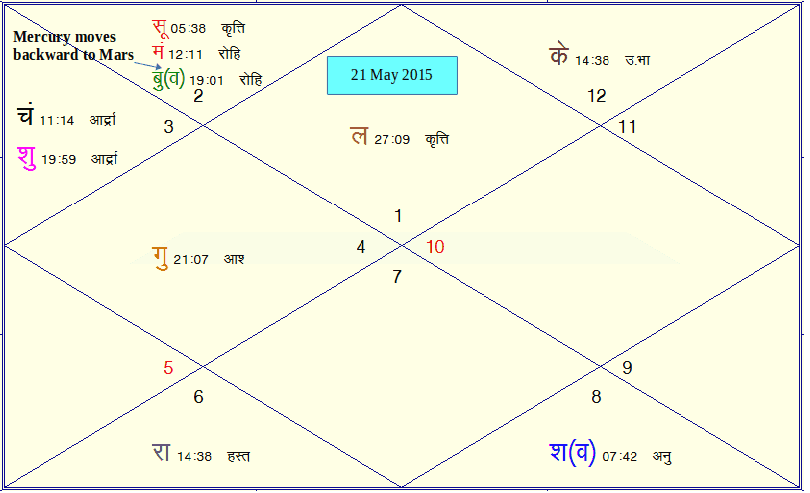 With the already bad situation Mercury , the media planet Mercury changed to retrograde motion and started getting closer to its arch enemy Mars , so Maggie got the prime slot of TV News Channels from Indian to Foreign Channels .The Nestle Management woke up from its slumber but by then damage was already done . Other state govts also woke up and started testing Maggie samples . Media was crying foul.

Mainstream Media , Newspaper and BBC Gets the News on Mercury becoming strong by retrograde … 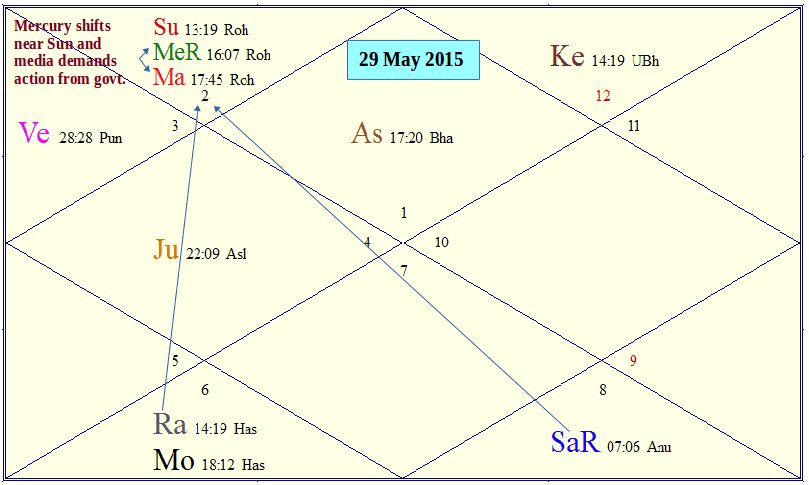 On 29th May 2015 , Mercury crosses Mars degree and reaches in middle spot, with media campaign reaching climax , demanding recall and ban of Maggie . On 31st May 2015, Mercury crosses over Sun also and Sun gets sandwiched between Mars and Mercury . Govt. starts ordering ban on Maggie from govt. Canteens and shopping malls also followed it .Media campaign starts losing its steam as Mars- Mercury conjunction ends after govt. starts acting.

As Sun gets sandwiched Between Mars & Mercury and state Govts Start Acting throughout India …. 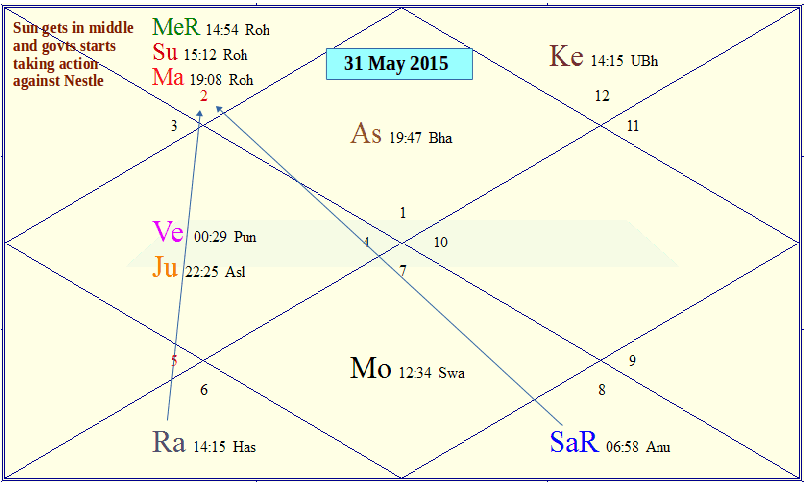 And Maggi’s Misfortunes Reach a Climax in a Week 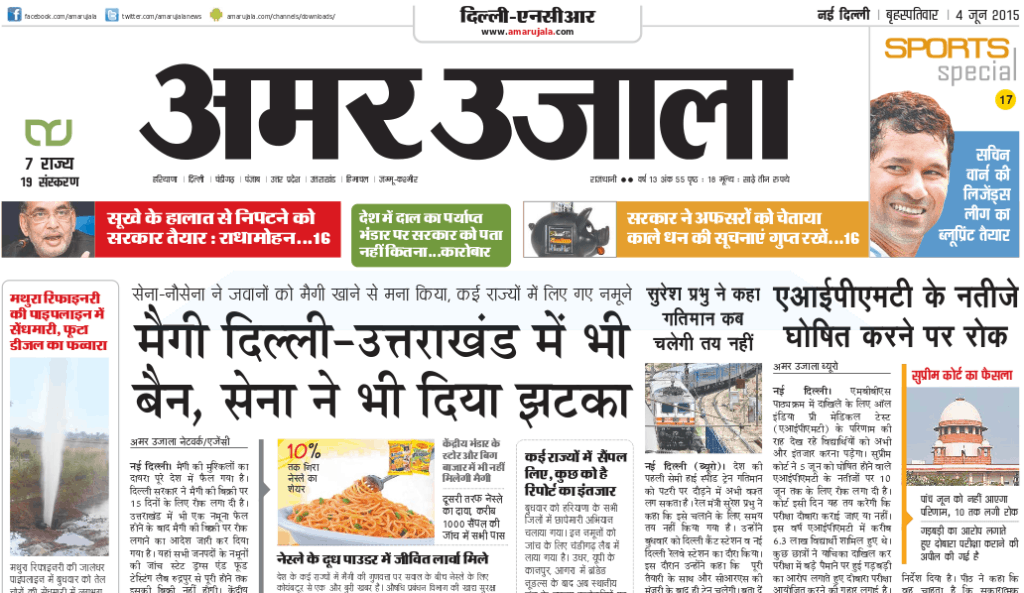 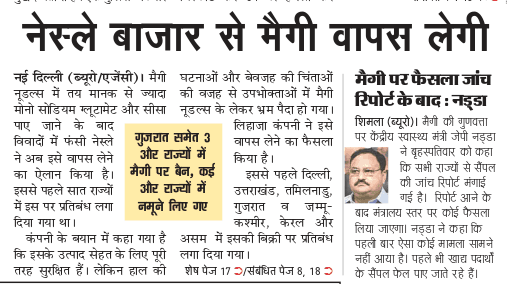 Nestle management announces recall of Maggie from Indian markets till Maggie comes out of Sickness from MSG and Lead. The share price of Nestle plunges by 22% . The bottom of bad spell of time touches on 7th June when Sun encounters Mars degreewise and starts overtaking it .The first good news for Maggie comes from Singapore , which finds MSG and Lead within permissible limits for India made Maggie . Nestle India shares zoom 7% in a day . 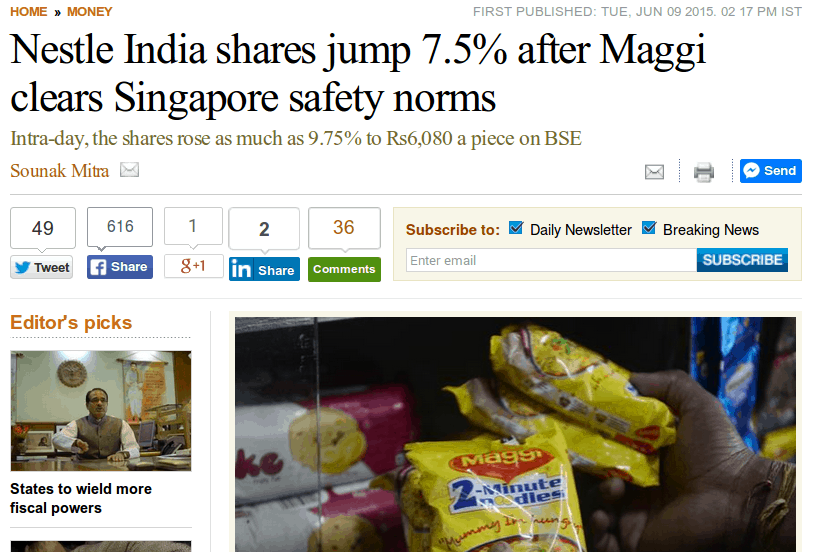 Discharge Date from ICU to General Ward for Maggi

Well , Maggie had asked me when she will be discharged from ICU and shifted to general ward . I told her it will be after 17th June 2015 , when the trouble making planets Sun and Mars will leave Taurus sign and Mercury will also become direct in motion .After that date, Nestle India share price may recover its losses to most extent . 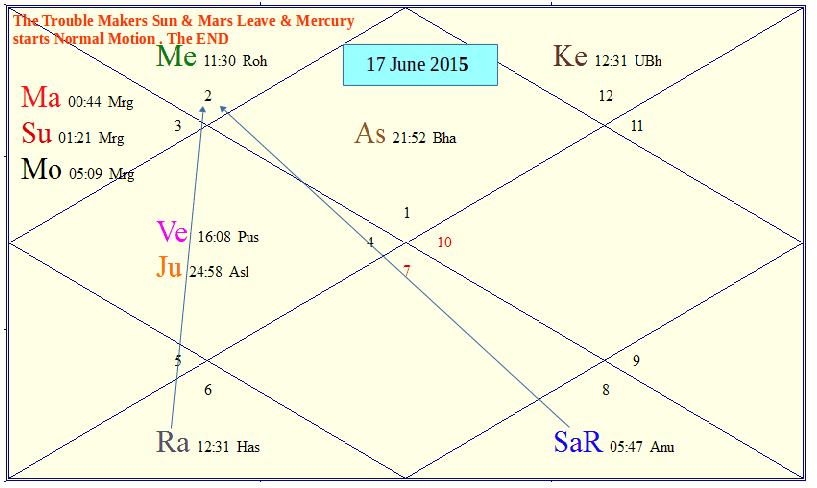 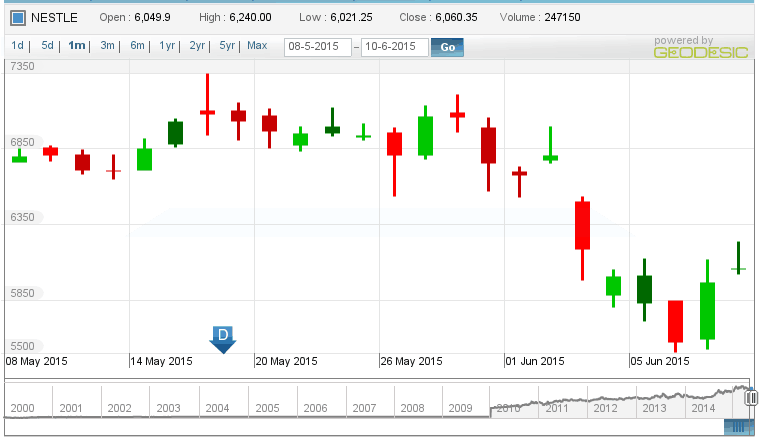 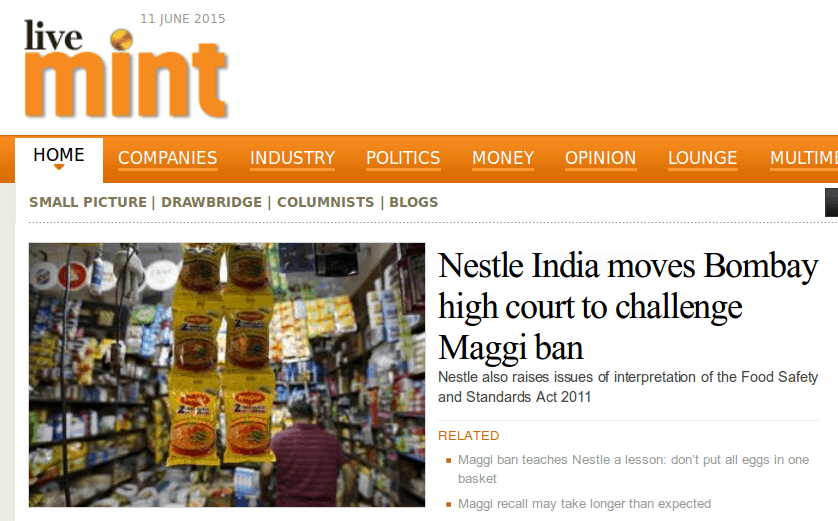 Do you still assume that planets have no influence on our life ? If somebody living in India does not know the Indian Laws , it does not mean that Indian Laws will not apply on that person. Similarly cosmic laws apply on everybody on Earth, whether you know them or do not know ! It is in your own interest to know them .

If you think only individuals panic when bad time strikes , A quote from this report  from Economic Times on 9th June 2015 Sleepless nights at Nestle, as staff and executives try to find what went wrong” “I haven’t slept for more than two hours in the past fortnight,” rued a middle level executive. “It’s been all about nonstop work, plant visits, meetings, tests, future strategies, decisions. Worse, we don’t know what will happen tomorrow,” he said, speaking on the condition of anonymity.”

Taurus – Scorpio Affliction’s Other Side Effects

FDA departments got active for other food products also all over India. Earlier there were real Earthquakes on 25, 26 April and 12th May in Nepal and India as Taurus is an Earthy sign.

Taurus also includes Banking industry and all Banks published bad annual results during April and May month and share prices of all banks fell after that . FIIs withdrew from Indian Markets in big way . Taurus being India’s ascendant sign , the sentiments in last 2 months has been very low and NIFTY fell below 8000 mark.

This affliction to Taurus will end after 17th June 2015 , so some relief is expected but final relief will come only in end July when Jupiter reaches Leo sign and Saturn becomes direct motion.

1 thought on “Maggi Ban During Taurus Affliction in 2015”