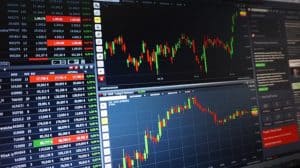 In 2018 , Sensex and Nifty crashed by 10% in February and September . This was predicted to our financial astrology learner clients in advance . In following astrological analysis , we discuss in detail how movement of Jupiter in Libra alone caused these crashes . 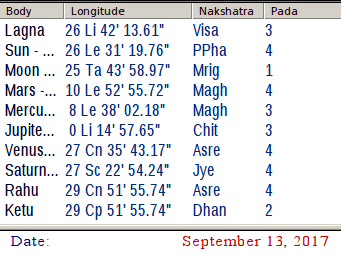 Jupiter had entered Libra Sign as per sidereal system on 13 September 2017 as shown in above image. It was moving with good speed and by 9 March 2018 it had reached to the end of Libra Sign at 29 degree 7′ and then it became retrograde .

It started moving back till first week of July 2018 when it reached 19 degree in Libra . It started again forward motion and by September 15 it has gain reached to 25 degree and with fast speed , it is to enter Scorpio by 11 October 2018. 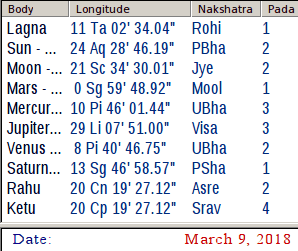 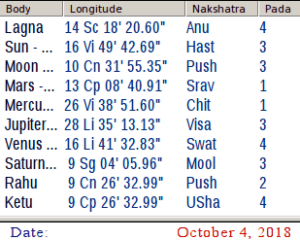 On Budget day on 1st Feb 2018 , stock markets had started falling when Jupiter was at 27 degree in Libra . The speed was quite slow so it took about a month to reach end of Libra . Many of my clients who had taken financial astrology classes called me to know what would happen next . I told them it would keep on falling till first week of March but it would not be final fall as it will reverse the motion and it would fall only by end of September 2018 when Jupiter  finally enters Scorpio on 11 October 2018. 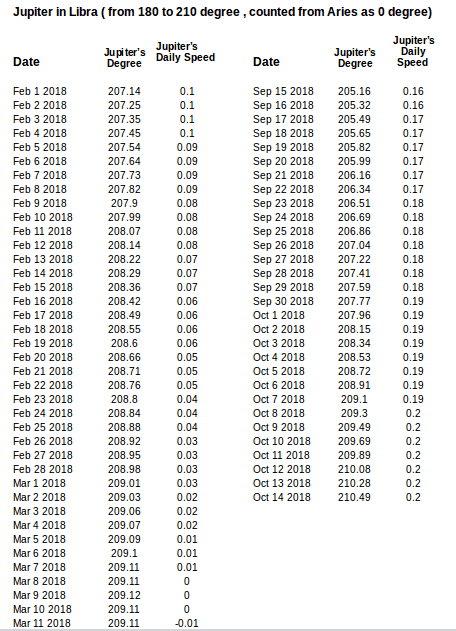 So, final fall in stock market was happening  when same 27 ( 207 in below table) degree finally being crossed by Jupiter . This time speed of Jupiter was faster by 3 times than in February 2018 as it is near Sun .Here, the fall was severe and quick .

Jupiter is a planet for institutional finance ,religion , faith , tradition and Libra is sign for Judiciary , equality .

In same period, the Supreme Court went on a spree of Verdicts in last week of September 2018 as it was in hurry . It pronounced verdict on Section 377 ( homosexuality as crime)and Section 497 ( Adultery) terming them Unconstitutional . It allowed entrance of women ( Libra sign owned by Venus , planet for women) into Sabarimala Temple in Kerala for all women citing equality.

#Me Too Campaign is also like hurried , divine justice for crimes committed long back !

Libra is also sign for Trade . And US President hit the international trade by putting tariff barriers against China and other countries and now renegotiating trade treaties with all countries . He also wants trade to be stopped with Iran , which led to crude oil price rise and major turmoil in world currencies.

Situation is likely to ease once Jupiter gets settled in Scorpio in October month . Scorpio is a watery sign and not known for open aggression but more about backdoor diplomacy , surprises and sudden events . So, we can expect an unexpected relief in the stock market and crude oil situation and things may not be as bad as these are visualized now .

Jupiter would also be under Rahu’s aspect till March 2019 , so situation remains muddy till then .

Current situation is similar to 3 months before Saturn entered into Sagittarius in January 2017 when we had severe beating of market due to election of Trump as US President and Demonetization by PM Modi and Market would oscillate between NIFTY 10000 to 11000 in next one year .

I had advised many clients who availed Financial Astrology Course to start selling the equity which they had bought in 2015-17 from October 2017 onward . https://www.quora.com/Why-is-the-Indian-stock-market-continuously-going-down/answer/YASH-SHUKLA-11