Update After Declaration of Results on 24th May 2019

This post was written  after Assembly Elections in Rajasthan, MP and Chhatisgarh when BJP lost badly . It had lost many Bye Elections also and mood was all round pessimistic about BJP’s prospects in Loksabha Elections as Mahagathbandhan was announced by BSP , SP and RLD in U.P. and  Congress with RJD in Bihar  while  Rafael deal controversy was under Supreme Court scrutiny.

Astrological results are dependent upon Dasha and transit of planets and this was used in this prediction for BJP’s victory based solely on BJP’s Horoscope .

Now when the results have come out , we can see that BJP’s fortunes turned better in February 2019 after Pulwama (14 Feb 2019) and Balakot events (26 Feb)  , which was predicted because Mars antardasha was to start from 10th Feb 2019 ( see point 9) and BJP started looking strong .

In last point on Transit , it was predicted that transit would also support when Jupiter and Saturn would become retrograde from 10th April 2019 ( Jupiter ) and 30th April 2019 ( Saturn) because they had not favoured BJP in direct motion.

Combined effect of positive antardasha and transit led to massive victory for BJP , which remains unbelievable for most people in given environment . Saturn with Ketu generally leads to such extreme results ( this happened in December 1984 when Rajiv Gandh got 415 seats ) and both were in degree conjunction during election period. Jupiter aspecting Sun from 15th May onward also made the difference in favour of BJP.

This Euphoria for BJP may subside in next 3-4 months when retrogression of Jupiter and Saturn ends. Ultimately Mahadasha lord Moon is in 6th House of problems and Mahadasha would run till 2028 , so negative results would also come  when Saturn, Ketu take over .

Since start of February 2018 , this question has gained traction in media , particularly after BJP losing the 2 Loksabha seats in a by election . Many political analysts are busy in writing the obituaries for BJP after last 2 months developments where banks reported massive NPAs and absconders like Nirav Modi linked to PM Modi just because they shared a common surname .

Astrological analysis gives some insight in such emotionally charged environment when everyone takes one side or other side as astrology solely depends upon planets , which can not be tempered .  So, I will base my analysis on reliable data of Bhartiya Janata Party’s birth chart ( 6 April 1980, 1145 Hrs at Delhi ).

Let us see some salients points in this chart :

1.  6 out of 9 planets are in 3-9 houses including Rahu-Ketu axis which is affecting Mars, Jupiter , Saturn and Mercury . It is similar to India’s independence chart where there are 5 planets in 3-9 houses . Surprisingly , it has similar Mahadasha Sequence with BJP being only 3 years behind from India’s Mahadasha sequence . Because of these factors , BJP is identified more as nationalist party than other political parties in India . 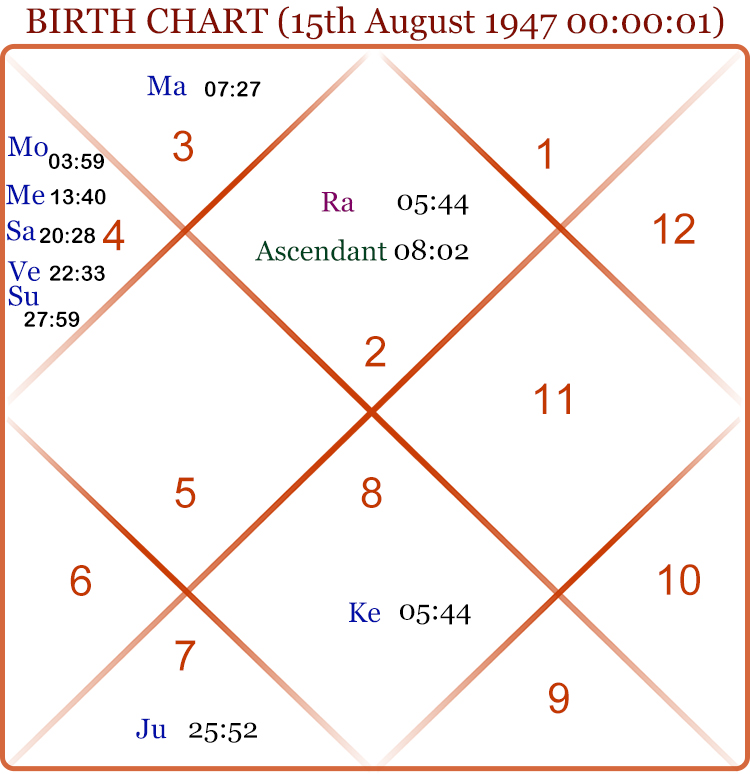 2.  Coming back to BJP chart , the ascendant sign is Gemini, which is known for communication, publicity , courage or risk taking , transportation , siblings , neighbours . And all these features can be seen in BJP right from its inception in 1980 or even before in its Jan Sangh avatar . Their leaders are good communicators and master in converting any debate or event to their advantage . This party is also always very concerned to India’s neighbours . Ketu is having 5th aspect on this ascendant , so it is considered against one particular religion , which is signified by Ketu for its orthodoxy and emphasis on physical actions .

3. The next thing , we can see that its ascendant lord Mercury is placed in 9th House of luck and religion . It is placed with inimical Ketu and aspected by 4 retrograde planets from opposite 3rd house. So, just like India’s citizens , BJP makes much intellectual noises and promises but fails to deliver a solid output when it is given a chance.

4. The most important house in BJP’s chart is 3rd house where there are 4 retrograde ( reverse motion ) planets Mars , Rahu, Jupiter and Saturn . Retrograde planets are like reverse gear in an automobile which are not applied in normal circumstances but are useful only when forward gears cannot be used . Therefore , BJP comes in power only after other political parties have been decisively decimated , maligned and public has no other alternatives left . When the situation is normalised , the Congress or Third front again comes in power.

5. The most important observation in the chart of BJP is that,  the 4 retrograde planets in 3rd house of Parakrama ( valor , risk taking , courage ) come in sequence in Vinshottari Mahadasha / Antardasha sequence as can be seen below for        BJP’s Mahadasha sequence : 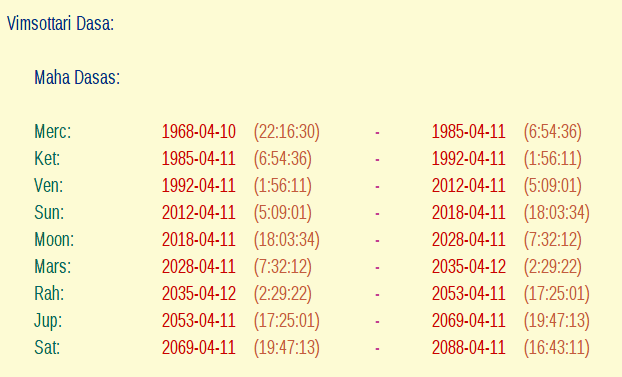 6. If we leave  partial  Mercury Mahadasha , which ended in  April  1985 we  can  analyse  all subsequent Mahadashas and see what happened in Mars, Rahu, Jupiter, Saturn antardashas , the 4 planets in 3rd house . Following is Ketu Mahadasha table and Ketu is in good 9th House of luck and religion . 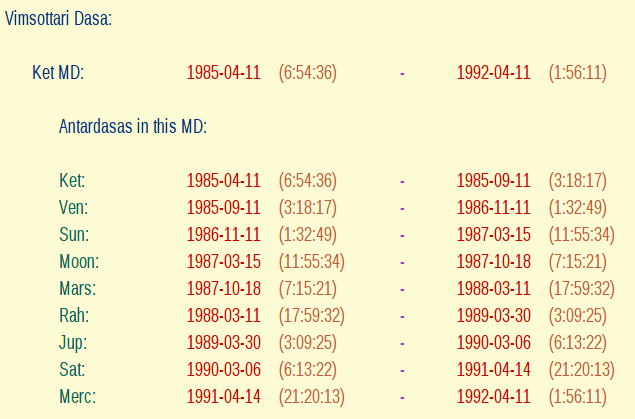 You can see that from October 1987 onward , Mars antardasha started and BJP started gaining ground in the wake of opening of Rama Janmabhoomi site to Hindus and start of worship in disputed structure and it gained good seats in Loksabha elections of December 1989 when Ketu-Jupiter period was running . It supported PM V.P. Singh’s govt from outside and started Ram Mandir agitation , resulting in demolition of 6th December 1992. 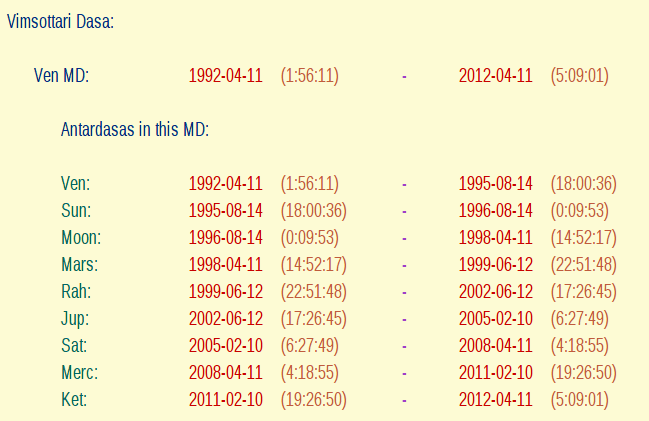 7.   Let us see the table for next Mahadasha of Venus , which is placed in 12th House in own sign Taurus . So, it is good as well as bad . While BJP greatly suffered in Venus-Venus antardasha ,  you can see that Mars antardasha onward , from April 1998 BJP starts improving its prospects and it forms government in 1998 and wins 1999 Loksabha elections with help of allies . 12th House signifies problems and Kargil war win helped BJP . So, the BJP was in power during Mars, Rahu and Jupiter antardashas but with support of allies , who constantly created problems for PM Atal Bihari Vajpayee as Venus was in bad 12th house of loss . Venus denotes women and ladies like Ms J Jayalalitha , Ms Mayawati , Ms Mamta Banerjee were constant headache for PM Vajpayee .

8.  Let us see next Mahadasha of Sun . It is well placed in 10th house of prominence , name and fame . Sun is also lord of 3rd house of Parakrama . Now we see what happened in Mars , Rahu and Jupiter antardashas. It again started gaining  popularity from January 2013 , culminating in getting absolute majority on own in May 2014 in Jupiter antardasha which ended in February 2015 . It remained in power in remaining antardashas also because of Sun’s good position . 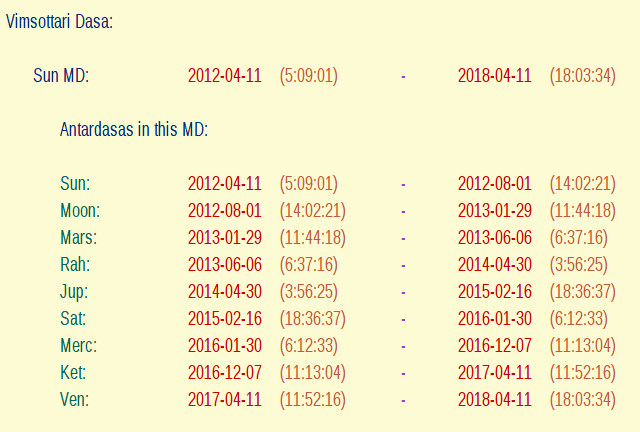 9.  Now , when it is ending in April 2018 , the momentum seems to lose . But before coming to any conclusion , we should see the Moon Mahadasha also : 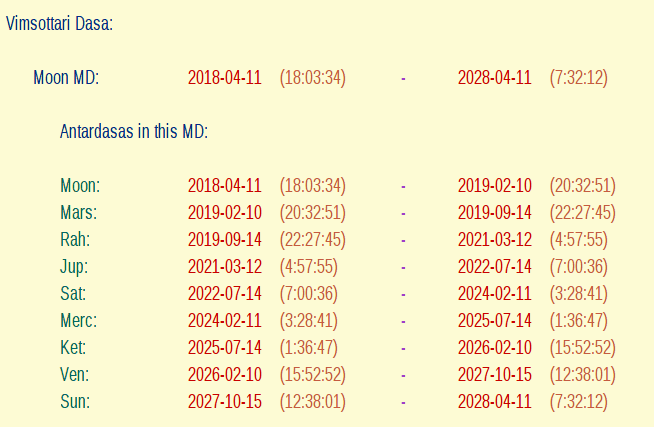 Surprisingly , we see that Moon Mahadasha will have Mars , Rahu and Jupiter period till April 2022 and Mars antardasha period will include the possible dates for Loksabha election dates after February 2019 . This shows that BJP will somehow again get traction and good performance can happen at the time of elections . However , we should also remember that Mahadasha lord  Moon is debilitated and placed in adverse 6th house of disputes , problems and conflicts . It is worse than Venus Mahadasha , where Venus was placed in 12th house but is in own sign .

Therefore , we can draw conclusion that BJP would not be able to muster absolute majority on its own as it did in 2014 and it may be dependent on allies who will be pricking all the time the BJP govt as happened in 1999-2004. It can lead to mid term polls also . Current PM Modi may find it too difficult to work under pressure from allies after having enjoyed full control over party and government for full 5 years and he may opt for back seat driving of government , installing his any lieutenant . See link about PM Narendra Modi’s Horoscope analysis .

10. Transit Effects : Above analysis has not undertaken the effect of transit of planets from its Moonsign Scorpio . Saturn is now in second house in Sagittarius till January 2020, which means it is under Shani Saadesati, which generally gives bad results in last stage if it has delivered good result from beginning.  Jupiter is in Scorpio sign from October 2018 for one year but it did not deliver in assembly elections in BJP states Rajasthan , MP , Chhatisgarh ) where BJP lost elections. But Jupiter and Saturn both would be retrograde by the time of elections so, it can give better results when finally results are declared in May 2019.