With globally rising panic for Corona Virus , I tried to study the planetary positions during global epidemic . Last such epidemic was Spanish Flu . The 1918 influenza pandemic (January 1918 – December 1920 ) is the last recorded global pandemic , which caused major loss of life and global economy and that too in an unconnected world .

1918 was the year both the WW-I ended and the heaviest pandemic of the modern history burst out. The world of 1918 is too much different from the world prior to the war. The maps changed, the empires collapsed, and new states emerged. These two global disasters caused the death of more than 100 million people and the pandemic influenza was responsible of a much higher mortality rate than the war.

The Planetary position during that time was like this

You can see how planet of disease & disruption Ketu is placed in Gemini sign of communication , contact in a scissors like situation with Saturn and Jupiter surrounding it on both sides , justifying the contagious and respiratory nature of the killer disease affecting global population. At that time , it took 3 years to dismantle the yoga formed by these 3 planets .

Why this combination is Unique ?

Jupiter is considered planet for growth , expansion, protection , general well being , institutional wealth ( national assets , stock markets ) . Saturn is planet for limiting excessive growth or speed just as brake does in an automobile . The two planets come together once every 20 years . So, every 20 years , we have financial spinning for about 2 years and it happened in 1920, 1940, 1960 , 1980, 2000 and now in 2020 . This signifies generational changes in global financial and trading system .

If Ketu get added to this Planetary conjunction of Saturn and Jupiter , it bring sudden , unexpected, natural disruptions to already grim situation .

This has already been discussed in my Financial Astrology Online Class since last 3 years !

Again the same combination appears in Gemini-Sagittarius axis and a contagious disease is creating panic and sending shock waves in industry and stock market .

During April to June 2020 , it may reduce its impact as Jupiter-Saturn come together in Capricorn while Ketu remains in Sagittarius . After June 2020, Jupiter again joins Ketu and in September 2020 , Rahu-Ketu finally leave Gemini-Sagittarius sign . Therefore , the situation may not be fully recovered until October 2020 .

On Feb 1 , 2020 , Mercury entered Aquarius sign , 6th from Virgo , the disease sign and Corona news started getting big Media headlines . On 17th February , it became retrograde and the world started talking only about Corona from this date . On 10th March 2020 , retrogression ends and it becomes direct , so we can expect some relief and on 7th April 2020 , it exits Aquarius . This also gives same timeline , that some reduction or at least media attention get reduced after this date .

Where is India in This Crisis ?

I had discussed Moon Mahadasha for India during 2015-25. Moon happens to be 3rd house lord in Indian Independence Horoscope.

Within this Mahadasha , we are in a difficult Moon-Saturn antardasha as can be seen below : 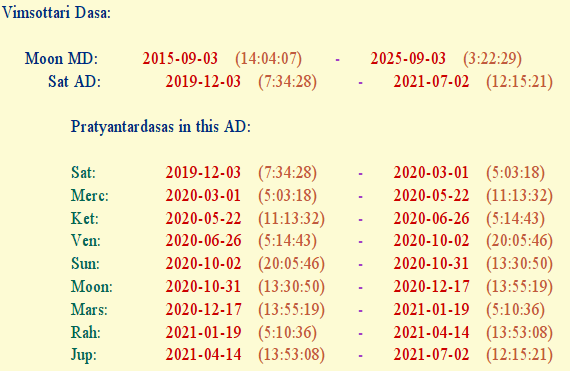 So, from December 2019 , we are in Saturn antardasha for 19 months . And we can see the people getting involved in agitation on CAA, NRC , Riots taking place and now Corona Virus scare affecting everyone . India will remain in one or other people related issues during this period which will be difficult to handle for rulers .

In transit also, Saturn has reached 7th from Cancer Moon of Indian chart , showing depressive events . Capricorn Saturn is otherwise also very people centric sign .You may read about this here . How Capricorn Saturn will Affect You & The World ?

It is double whammy for India now : Local plus Global Crisis Coming Together !

Astrology hints about times of problems . In times of crisis, we need to unite but usually we fight each other . Next stage of that crisis is natural disasters like Earthquake , thunderstorms, floods, famines , pandemics etc . These forces us to leave our petty disputes and get united .

So, Trump has stopped talking about his Election agenda 2020, on taming China and Iran which he was doing everyday since January 2020 . In India , Hindutva and Secular brigade ( Shahin Bagh ) are now silent . Media has moved now to real crisis where nothing is now in human hands except for waiting for good days !

When we fight unnecessarily , God gives us genuine reasons to fight and dissipate our excess energy and stamina to make us normal again . World War I ended because Spanish flue had started taking toll on armies of both sides !